Anaemia is a condition in which a person has a lower number of red blood cells or haemoglobin than normal in each blood cell. This causes inadequate oxygen in the body which contributes to the overall health of your body.

Anaemia is the most prevalent nutritional problem globally with an estimated 2.15 billion people suffering from it due to iron deficiency. This condition mostly affects women and children in developing countries. 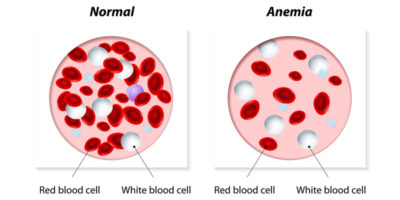 What are the types of Anaemia and their causes?

Other causes of Anaemia are:

These cancers may not cause signs in the early stages but as they progress, the followings signs and symptoms may occur:

Anaemia symptoms depend on the cause of the anaemia and include:

Treatment for anaemia depends on the cause of the anaemia. These treatments include:

To prevent yourself from getting anaemia, you should do the following:

Click the button below to find out more about different conditions and treatment options from our partner hospitals around the world.

Treating conditions in their early stages is less costly and more likely to be successful.