What Is Skin Cancer?

Did you know that skin cancer accounts for 50% of all cancers combined?

Research has shown that 90% of skin cancer is caused by exposure to the sun and affect more men than women. Research has also shown that people of all skin colours can be affected; however, light skinned individuals are at a higher risk of getting skin cancer.

Skin cancer is the uncontrolled growth of malignant cells (cancerous cells) on the skin. It originates when the cells that line up along the membrane that separates the superficial layer of skin from the deeper layers. 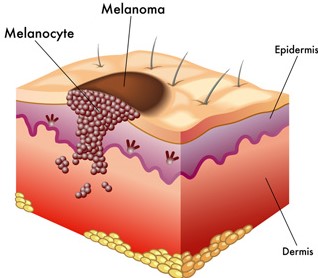 Skin cancer is the uncontrolled growth of malignant cells (cancerous cells) on the skin. It originates when the cells that line up along the membrane that separates the superficial layer of skin from the deeper layers.

Some of the known causes of skin cancer include:

First, a doctor (general practitioner or dermatologist) examines the skin to determine whether any change to the skin are likely to be skin cancer. Secondly, if the doctor suspects skin cancer, the doctor removes a sample of suspicious skin for testing (skin biopsy).

Choosing a treatment option for skin cancer depends on the location of the tumour and its size.

There are several treatment options Set out below are just a few:

To prevent yourself from getting skin cancer or to reduce your risk factors, you should do the following:

Click the button below to find out more about skin cancer and treatment options from our partner hospitals around the world.

Treating skin cancer in its early stages is less costly and more likely to be successful.

We, at International Medical Treatment (IMT), are experienced facilitators who can link you with some of the best dermatology cancer specialists in our partner hospitals in India, Dubai and Thailand.