Liver cancer is one of the most common causes of cancer deaths worldwide, leading to over 750,000 deaths annually.

This article focuses of metastasis liver cancer which can often be overlooked. 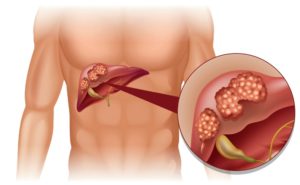 The liver is the largest internal organ in the human body whose major functions include:

When cancer spreads to the liver, the liver may be damaged leading to it not performing its functions as required.

What is Liver Metastasis?

This is liver cancer that occurs when primary cancer from other body parts, spreads to the liver. It is always caused by primary cancer in the pancreas, ovaries, uterus, stomach, kidney and breast, among other parts of the body.

How does this spread occur?

Even though all cancers may not follow the same process, most of them go through it, which leads to secondary cancers.

Some of the symptoms of metastasis liver cancer are:

How is Metastasis Liver Cancer treated?

The treatment for secondary liver cancer is aimed at controlling the spread of the cancer and the shrinking the cancer tumour(s) so as to improve a person’s quality of life. Chemotherapy is usually the most common type of treatment used, however, the type of treatment depends the location of the primary cancer, the number and size of the tumors, the patients age as well as their general health.

The types of treatments used can include:

However, in most cases, palliative care is offered to control the cancer symptoms, and prolong a person’s life while improving their quality of life.

There is no known way to prevent secondary liver cancer, however, through palliative care as stated earlier, people with this type of liver cancer can have improved quality of life by having its symptoms reduced and its growth slowed down. By treating primary cancers before they spread to the liver, you can also reduce your risk of getting liver metastasis.

Early screening of cancer especially if you have hepatitis, which is a major cause, can help you get early diagnosis which is very helpful in getting effective and efficient treatment which will prevent or stop the growth of the cancer cells.

Treating  cancer in its early stages is less costly and more likely to be successful.