The ovaries are part of the female reproductive system. Women have two ovaries which are located in the lower abdomen on each side of the uterus. The ovaries produce eggs and hormones (oestrogen and progesterone). What is Ovarian cancer? 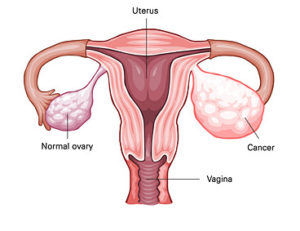 What is Ovarian Cancer?

Ovarian cancer is one of the common gynaecological cancers. The others are cervical and uterine cancer. Ovarian cancer occurs when harmful cancer cells grow in the ovary.

There are three types of ovarian cancers, classified according to the cell they begin to form from.

Signs and symptoms of Ovarian cancer

These cancers may not cause signs in the early stages but as they progress, the followings signs and symptoms may occur:

It is important to note that having any of the symptoms listed above does not necessarily mean that one has ovarian cancer. One should seek medical advice or have a test done to be certain.

The precise causes of ovarian cancer have not been established, however factors that increase the risk include the following:

To diagnose gall bladder or bile duct cancer, the following could be undertaken:

The treatment for ovarian cancer depends on several things, for example: how far it has spread, your general health and whether you’re still able to have children.

The aim of treatment is to cure the cancer if possible. If the cancer is too advanced to be cured, the treatment aims at relieving symptoms and controlling the cancer for as long as possible.

The following are some of the treatments that can be carried out if one has ovarian cancer:

The following factors may reduce a woman’s risk of developing ovarian cancer:

Click the button below to find out more about ovarian cancer and treatment options from our partner hospitals around the world.

Treating ovarian cancer in its early stages is less costly and more likely to be successful.