What Is Lung Cancer?

Lung cancer is a type of cancer that occurs when malignant (cancerous) cells begin to grow rapidly and uncontrollably in the lung(s). The two main types of lung cancers are small cell and non-small cell lung cancer which are staged differently.

Lung Cancer is among the most common cancers and most common causes of cancer deaths worldwide. In 2018 alone, over 1.5 million deaths occurred due to this cancer.

Even though the main cause of this cancer is not known, your risks of developing it can be increased by factors such as smoking and exposure to toxic substances like radon and radioactive substances.

Lung cancer can be diagnosed through tests such as imaging tests like x-ray and other more advanced tests like magnetic resonance imaging (MRI), computerised tomography (CT) and positron emission tomography (PET) scans.

The treatment of lung cancer highly depends on its staging which will be the main focus of this article.

As the main cause of lung cancer is not known, it can only be prevented by reducing risk factors such as smoking and exposure to harmful environmental substances which can increase your risk for this cancer.

The staging of lung cancer is very important in guiding specialists to determine which treatment is the most appropriate. The TNM system is what is applied in lung cancer staging to determine the following:

Staging for the Main Types of Lung Cancer 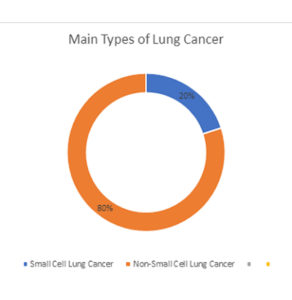 This is accounts for about 20% of lung cancer cases and is mostly caused by smoking. It begins in the bronchi and spreads quickly to other body parts. In staging SCLC, the TNM system can be used putting it in these two main stages:

This type of lung cancer is more common than SCLC, accounting for approximately 80% of lung cancer cases. The TNM system is the most common way of staging this cancer and it is used together with the numbers X, O, 1, 2, 3 or 4 after each letter which describe:

The stages of non-small cell lung cancer are as follows:

After your doctor or specialist has done the lung cancer staging, they can now move on to determining which treatment is best.
Lung cancer staging is a very important process in dealing with this kind of cancer and therefore should be taken seriously and done properly.

Click the button below to find out more about lung cancer and treatment options from our partner hospitals around the world.

Treating lung cancer in its early stages is less costly and more likely to be successful.

We, at International Medical Treatment (IMT), are experienced facilitators who can link you with some of the best lung cancer specialists in our partner hospitals in India, Dubai and Thailand.